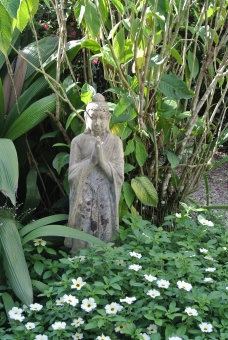 Looking back at these pictures I was reminded that this trip almost failed from the beginning.

Last month I went on a yoga retreat with my mom to celebrate two very important milestones. It was in a beautiful location, with an amazing teacher, and the possibilities were endless; however, the trip didn’t start out so smoothly.

I’m a bit of a perfectionist and I like things a certain way (most of the time). I had planned out everything for this trip perfectly, but what I hadn’t accounted for was human error. In order for us to reach our final destination we had to take a little puddle jumper (twin engine) that flew from San José, Costa Rica to Puerto Jiménez on the Osa Peninsula. Well, I read the time wrong and we ended up missing the flight. Due to the size of the plane and the amount of travelers, the only flight we could get on was the following day at 5am. Everything is a bit matter-of-fact now, but when I was at the counter it was an entirely different story … the poor ticket agent! I was so upset that I started asking the (really nice) man behind the counter why was it that he couldn’t just hold the plane? I was pissed off at the airline, the airport, the people who couldn’t possibly detain a plane, and my mom for being so nice … but not once did I even stop to realize it was entirely my fault.
As I started to get more and more frustrated my mom took over and I stomped of

f to call my other half (Matt), my trip was officially ruined, or so I thought.
On the phone, Matt, very cleverly I might add, said that one of the reasons I was so upset was because I knew it was my fault that we missed the flight, and it was. I read the time wrong, my mom trusted me with the information and I royally screwed up.
My mom, being the wonderful person she is, said “let’s just make the most of it and have fun”, which echoed what my Matt had said just a few moments ago. True, but we were going to miss the first night of the retreat!!!!
Well, after I c

almed down, I decided to follow her lead and we had the most amazing time exploring San José.

Things don’t always work out like you plan but sometimes that’s a good thing, and the memories we create from random adventures are SO worth it 🙂